Barkeys in the United States

Family history and blog for Barkeys and related families

Two Barkey brothers from rural northwest Indiana and their family paid a great price for the freedom we enjoy in America.   The brothers both attended Lowell High School near Roselawn, Indiana where they were active in sports and music.  Mervin enlisted in the Army Air Corps where he served as a top gunner on a B-24 Liberator.   His younger brother Ray enlisted on March 31, 1943 and became part of the 101st Airborne Division, 506th Parachute Infantry Regiment.

As the allied forces pushed across western Europe in 1944, both brothers were in grave danger.   Ray was injured on June 6th but went back into action on June 18th.   On October 6th in a drop over western Europe he was critically wounded and died in an army hospital in Holland the next day.   On February 24, 1944 his older brother Mervin had been shot on a bombing mission over Germany.  After parachuting safely he was taken prisoner by German forces.  Mervin was a veteran of 16 previous missions over enemy territory and had been in England since October, 1943.  He was a German prisoner of war until his prison was liberated in July 1945.

Ray was laid to rest in the Netherlands American Cemetery at Margraten, Netherlands.  Both Ray and Mervin were recipients of the Purple Heart and many other service awards.    Ray’s grave has been adopted for care and honor by Ricardo Barkey of the Netherlands.

A special thanks is due to Ricardo Barkey for his kindness in caring for Ray’s grave and for Ricardo making an inquiry to Dick Barkey of Colorado about a possible relation to Ray.   It appears the only connection is that we share the same family name.  Ray’s grandfather immigrated to America from Prussia in northeast Germany in 1870, whereas Dick Barkey’s  ancestors came to Pennsylvania from Switzerland in 1717.   Though not related, we are nonetheless grateful for the gifts these Barkey brothers made to the freedom we treasure.

Our parents, Ruth and Cline Barkey, parents of David, Richard, Stanley and Paul Barkey, met in Chicago at Moody Bible Institute in 1934.   Ruth King was from Indianapolis and had attended the Indiana Central University (now the University of Indianapolis) for one year before attending Moody.  When they met she had graduated Moody and had taken a job at the school as a secretary.   Cline was from rural northeast Colorado and had attended Colorado A&M College (now Colorado State University) for a year after high school.  Before beginning his studies in Chicago he was working on the family farm near Haxtun, Colorado when his uncle, Rev. Edward Barkey suggested he consider attending Moody.

Dad arrived in Chicago in January 1932.  It was a stark change from small town rural Colorado to the big city.  The Moody Bible Institute (click to learn about Moody) program was three years of study and Dad and Mom met on a blind date in the summer of 1934 just before his final year.

Dad was ordained a Baptist minister and over the next four decades they served in churches in California, Illinois, Colorado, Minnesota, Nebraska, South Dakota and North Dakota.   Dad earned his B.A. degree from Greenville College during the six years he served as pastor of Cottage Hills Baptist Church near Alton, Illinois.  While serving in churches our parents worked hard to provide for our family.   Mom was a superior typist and organizer so she worked in law offices, a TB Sanitorium, and for the U.S. Department of Agriculture.  While they were serving in North Dakota, Mom took on a job to help fund their trip to Argentina where Dave and his wife Marge were missionaries. Here’s the long list of jobs that Dad did to put food on the table:  butcher, milk truck driver, corn picker, insurance sales, farm labor, real estate sales, mail carrier, short order cook, rescue mission assistant, roofer, custodian, construction, hospital chaplain.   Our family never had much but we always had a home and food and we always felt loved and cared for.

Over the years I remember hearing a lot about the school our parents attended in Chicago.   Stanley attended Moody and he also met his wife Stephany in Chicago where she was a nursing student.  The school was established in the 1870’s by Dwight L. Moody, a widely known preacher in the late 1800’s.   Somewhat like Billy Graham, D.L. Moody held crusades all over the U.S. and Europe.  His events often included the song “Great is Thy Faithfulness”(click to listen) that became a theme at the school.  It is a song of gratitude and encouragement that often plays in my head.  The song is a great reflection on our parents. 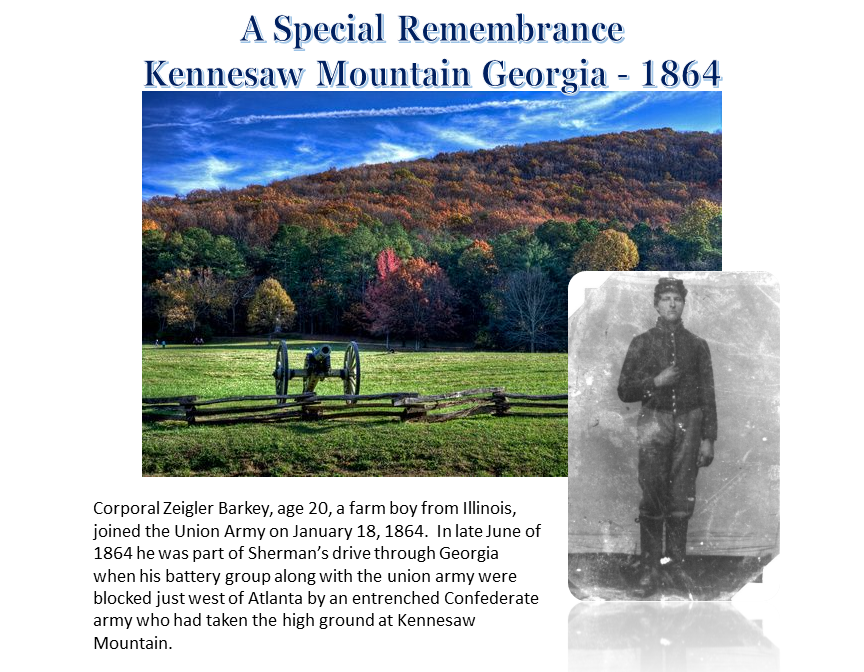 Kennesaw Mountain is one of the most tranquil and beautiful places in Georgia. But June 27th it became a raging hell of exploding artillery shells, smoke, and dead and injured solders and horses.     In terms of casualties, the Union Army lost about 3,000 to 1,000 confederates.     Despite the losses at Kennesaw Mountain, Sherman’s troupes were still able to work their way toward Atlanta by flanking the Confederates.

Zeigler survived this harrowing day.   It’s not hard to picture him handling horses with a heavy artillery piece, trudging through the strange south country, caring for his horses, moving equipment into position, taking cover, not sure about the next meal or the next day, sleeping on the ground and hearing the cries for help from the wounded during the night.

Zeigler mustered out of the Union Army in July 15, 1865…. Thankfully to become our ancestor…..father of Frank Barkey … grandfather of Cline Barkey … We can take pride of his service and the union of American States that he helped to preserve.

Here is a letter he wrote home to his sister Judith soon after the Kennesaw Mounting Battle: 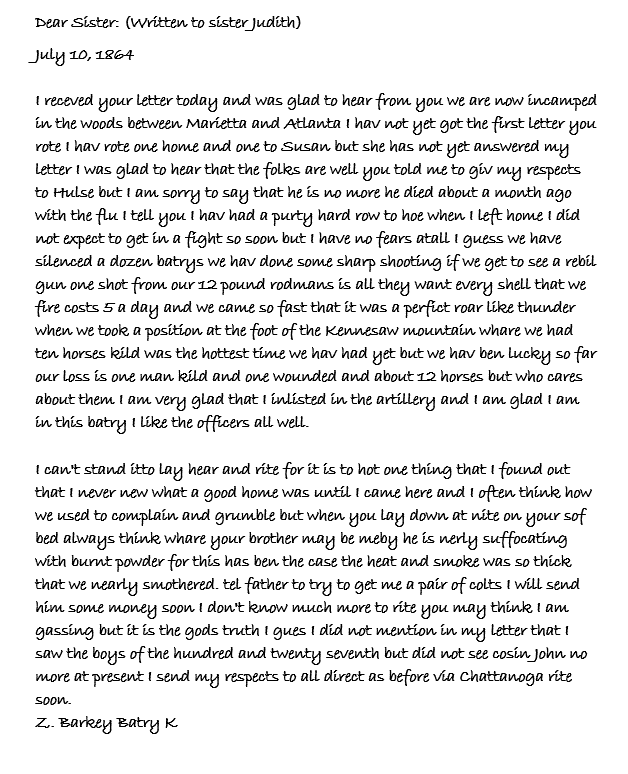 For more information about Zeigler Barkey and his Civil War Service, click on this link: 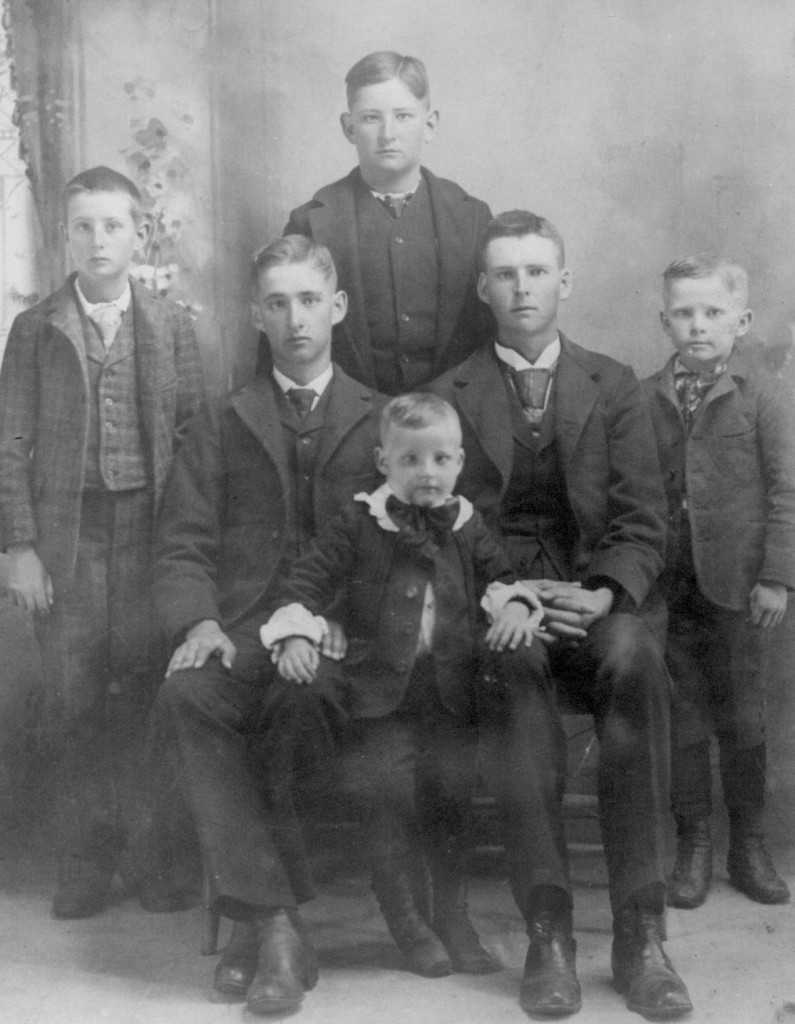 Zeigler died February 4, 1914 and is buried at the Highlands Cemetery, northwest of Courtland Nebraska.